Thank you for visiting

Nulato Hills Enterprises, LLC is wholly owned by the Nulato Tribal Council to create economic opportunities for the tribal membership while expanding the Tribe's services for its members. We look to our Core Values for guidance:

To identify and develop the skills of community tribal members and enhance our people, assets and resources through mentoring, training and education to foster and sustain economic development in the community.

To develop self-sustaining opportunities toward self-determination and reinvestment in our community. The vision statement of Nulato Hills Enterprises, LLC was developed by the Nulato Tribal Council to create the vision and purpose of the for-profit company.

For centuries the Athabascan people have been nomadic throughout Alaska. With professional experience and a skilled workforce, we look to share that with our clients.

NHE's interest in language services stem from its very heart, the Nulato Tribe. As we help others, we look to help ourselves in language revival and prosperity.

As we enter into the 21st century, so does our culture. We look to the past to provide for the future. Professional Services is another example of that transcendence.

Nulato was incorporated as a second class city in 1963. Nulato is recognized by the Alaska Native Claims Settlement Act of 1971, and is a member of the Yukon-Koyukuk Subregion of the Tanana Chiefs Conference (an ANCSA Regional Non-Profit Corporation). In the late 1970's, the community decided to develop a new townsite in the hills just west of the old townsite. Moving from a flood plain area was the primary motive for the new development. Ice jams and stream overflows cause flooding in the old townsite about every two to three years. In 1978, a health clinic was established at the new townsite and in 1981, large scale housing construction began.

Today, the population of Nulato is 340 residents per the Alaska Department of Community and Regional Affairs' Community Profile. Of these residents, 96.9% are Koyukon Athabascan Indians. The potential work force, age 16 years and older, is listed at 198 persons. Of this work force, 55% to 78% are perpetually unemployed. Most of the employment is government funded. Seasonal employment such as BLM emergency fire fighting positions, and short-term projects are important sources of cash and these sources are annually questionable. The occasional Capital Improvement project which is usually local hire, brings income to a selected few, but these are generally short-term jobs. Future local employment and economic opportunities will remain virtually unchanged unless long-range economic development goals are met and sustained.

Residential homes are built of both log and frame construction with fuel oil and/or wood stove heat sources. Facilities in the community include a church, two stores, a community hall, a health clinic, a head start facility, a school, a post office, a teen center, an adult center, a lodge, two Laundromats, a city garage, a state garage, and a National Guard armory. The local school provides the students with a K-12th grade educational curriculum. A Head Start program is also offered in the community. Higher education is offered through the University Extension Regional Learning Center based in Fairbanks. Classes are held in the local school and are usually by audio-conference. 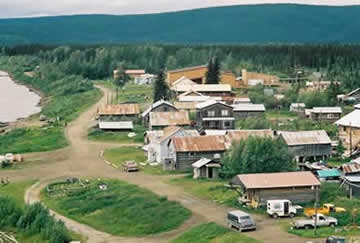 Front Street on the bank of the Yukon River
As to cost of living, Nulato is one of the highest areas within the State of Alaska. It is estimated that it costs approximately 55% higher to live in Nulato than it does in the urban areas of Fairbanks and Anchorage. These in turn are higher than “Lower 48” states. (E.g. Fairbanks is 28% higher than “Lower 48” cities per ACCRA – Association of Chambers of Commerce Research Agency). Transportation from Nulato to Fairbanks is about $560.00 round-trip. Fuel is $6.25 per gallon of gas and $7.25 per gallon of heating oil. Food prices are marked up accordingly due to high costs of freight and profit margins.

A traditional smoke house in Nulato

Nulato, Alaska 99765 is little known beyond interior Alaska except perhaps during the running of the world famous Iditarod dogsled races. In even number years the race follows a northern route to Nome and mushers pass through Nulato. The name of the Athabascan Indian village on the Yukon River means “dog salmon camp,” modified to express “in the shelter of the bluff.” It is home today to a population of about 340, almost wholly Athabascan. For such a small town, Nulato has some fascinating stories to tell.

Not only was Nulato an important fish camp along that stretch of the Yukon River for centuries before the arrival of Western explorers and traders, Nulato was also an ancient trading center for commerce between Alaska's Athabascan Indians and the Inupiat Eskimos. So its location was a natural for a Russian fur-trading post during the years that the Tsar owned Alaska. It is also one of only two of Alaska’s villages – Kaltag being the other – that celebrates the Stickdance, a ceremony also important among some tribes in the Southwestern United States.

The Nulato residents are primarily Koyukon Athabascan Indians; with a traditional subsistence lifestyle. Nulato was the trading site between Koyukon Athabascans and Inupiaq Eskimos from the Kobuk area, which is west and north of Nulato.

The Nulato Tribal Council is represented by a seven (7) member traditional council, and is recognized by the federal government as the official tribal governing body for the village of Nulato. The council is entrusted with the health, safety, and welfare of the community members.

Nulato Hills Enterprises, LLC (NHE) was founded in 2014 by the Nulato Tribal Council (a federally recognized tribe located in Nulato, Alaska) to serve as the for-profit entity in which to generate additional revenues and provide employment opportunities to the local Nulato tribal members.

NHE is wholly owned by the Nulato Tribal Council and its main base of operations is located in the community of Nulato, Alaska. NHE is a professional services company which provides the following.